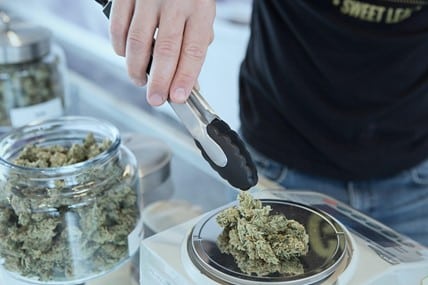 “The only constant in life is change,” declared the philosopher Heraclitus in ancient Greece.

The same could be said for marijuana’s legality in today’s America.

In our review of the latest on marijuana laws, we'll look at what to expect if you're pulled over while driving high, how a marijuana conviction affects your car insurance rates, and how recreational and medical marijuana usage can affect your life insurance.

Marijuana laws are seemingly changing daily. Or at least the news is about recreational use bills being pursued in medical use-only states.

There is also activity on reforms, bills, and task force recommendations being pursued in the fully illegal states of Alabama, Idaho, Kansas, Nebraska, North Carolina, South Carolina, Tennessee, and Wyoming.

The Marijuana Policy Project (MPP) provides an interactive map in which you can dive into your state’s marijuana status.

What’s Legal and Where

Cannabis is now legal in 15 states and the District of Columbia. And 36 states allow for some form of access for medicinal use.

The only commonality: You must be 21 or older.

While most of the amount of marijuana you can possess is up to one ounce, some states allow for 2 ounces (the district) or 2.5 ounces (Maine).

Some even allow two different amounts whether you are inside or outside your home:

For specific questions regarding marijuana law, there are several online legal advice sites in which you can connect one-on-one with a legal expert.

For recreational marijuana, most states that have legalized it have open container laws. So, store your marijuana purchase as you would your alcohol purchase.

You cannot have marijuana before driving or while driving, again mirroring drinking, and driving statutes.

As expected, specifics regarding these laws vary by state: In Maine, you can have up to 2.5 ounces of cannabis in the cabin of your car if it is sealed in a child-proof container. In Nevada, it’s up to 1 ounce of marijuana or an eighth of an ounce of concentrate in a sealed container.

If your cannabis is not in a container and if that container is not closed or sealed, breaking the open container law will cost you: In California, the fine is up to $100; in Vermont, up to $200.

For medical marijuana, most of the states that have legalized it require you to have an identification card. With that card, you can drive with marijuana in your possession, but, just as with recreational marijuana, you cannot use it in your car — even if you are a passenger, or even if it is parked — or drive after using it.

Also, keep the product, which must be purchased from a legal dispensary, in a safe and private place, like your glove box. Keep it sealed in its original packaging or container until you get home. And drive with your medical card and license.

There are a few common elements regarding marijuana and cars, however. If you are caught driving high, you will face the same penalties as someone driving while drunk.

The police have the right to search you and carry out urine or blood tests if they believe you are under the influence of controlled substances. Refusing is a first-degree misdemeanor.

Law enforcement has probable cause to search you and your car if they notice open containers of marijuana, if you are driving recklessly, or if they smell marijuana in your car.

Since marijuana is still federally illegal in the United States, you can only use your products within state lines. If you happen to get arrested on marijuana charges, you have the right to hire a criminal defense attorney to defend you.

Make sure your attorney is proficient in establishing technical defenses related to improper police searches and filing motions to suppress or exclude evidence. Also make sure they know when and how to file an appropriate motion to dismiss based on an actual versus a constructive possession issue.

If there is no admissible evidence that you were driving while impaired, then your car insurance should not be affected.

Of course, if your possession of marijuana charge leads to your license being revoked or suspended, that has a direct impact on your car insurance.

Being convicted of driving under the influence will raise a red flag with car insurance companies, as that charge will be on your driving record. Plus, some states will automatically suspend your license.

Allstate and Liberty Mutual are the most stringent when it comes to raising rates for DUI charges; State Farm and Progressive are the most lenient.

And if a standard insurance carrier won’t cover you because of your DUI, then non-standard, or high-risk, insurance is an option.

Even though your car insurance rate will be much higher — expect double or triple more than normal — comparison shop non-standard insurers as you would regular insurers to try and find the lowest rate possible.

You can use marijuana and get life insurance. Again, your state’s legality is a factor regarding who will cover you, how you’ll be rated, and what you will pay.

The context concerning medicinal versus recreational marijuana will cause the insurer to view your case differently.

Regarding medical marijuana, insurance companies will evaluate your underlying medical condition requiring the marijuana treatment when calculating your rates.

With recreational marijuana, more conservative insurance providers might place marijuana users in the same category as tobacco smokers, depending on how much you use. The average life insurance rates for tobacco users are $83 a month, or $992 annually.

More lenient insurance companies may not hike your rates if you meet certain usage limits. For example, MetLife allows you to smoke marijuana up to four times a week without classifying you as a smoker.

Globe Atlantic Life allows marijuana usage up to three times daily in your late 20s to get normal rates. Prudential and Forrester Financial are two other companies with looser guidelines.

Whatever you do, do not lie about your marijuana use. Don’t worry about any legal ramifications, as insurance companies won’t report you.

Besides, if you use marijuana medicinally, the prescription will appear in your medical records. And if your life insurance company requires a medical exam, the tetrahydrocannabinol (THC) will show up in your drug test.

Plus, lying to insurance is considered fraud. Your beneficiaries could find themselves without a death benefit should the claim on your policy be denied based on this omitted information.

We hope we’ve provided a bit of clarity as to what you can and cannot do regarding marijuana and made you aware of where to get more info.

Karen Condor is an insurance expert who writes and researches for the life insurance comparison site, QuickQuote.com.